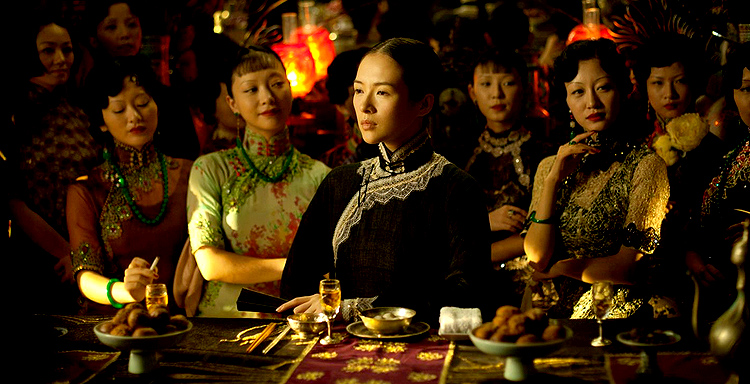 Master director Yimou Zhang tackles an adaptation of the Coen brothers’ classic Blood Simple in this period dramedy full of slapstick and plot twists. When the owner of a Chinese noodle shop attempts to kill his adulterous wife, the fireworks fly. The proprietor also hopes to eliminate his wife’s woebegone lover, but complications and high-flying action arise courtesy of a rampaging band of feudal soldiers and the shop’s wacky employees.

Zhao is an ageing worker who toils away in Shenzen in order to earn a living. When his friend and colleague Wang suddenly dies, Zhao decides to transport his body back to his native town. He purchases two tickets for the cross-country bus, and pretends that his silent travelling companion has drunk so much alcohol that he has fallen unconscious. Shortly afterwards, the bus is attacked by armed bandits. Zhao asks the bandits to kill him first, so that he can stay with his dead friend forever. Touched by this display of loyalty, the robbers decide to let the bus go. But instead of thanking Zhao, the other passengers throw him and his dead friend off the bus. Pretending that his friend is seriously ill and must be taken to hospital immediately, Zhao tries to flag down passing cars. After spending the night in a hotel, Zhao discovers that all his money has been stolen and begins to lose heart. But he refuses to be browbeaten. Whenever he needs money, he rearranges Wong so that he looks like a beggar. And whenever he is hungry, he joins a funeral party and bawls his eyes out so that he can enjoy the food served at the wake. During his odyssey across China Zhao is obliged to get along with all kinds of people. Just before he reaches his destination, the old man and his dead friend are caught in a torrential downpour, so that now Zhao finds himself engaged in a struggle against nature.

Utilizing a hand-held camera to create a frantic, off-balance effect that is radically different from the techniques with which he made his films best known to Western audiences Raise the Red Lantern and Ju Dou, Chinese filmmaker Zhang Yimou has made a fast-paced modern comedy that serves as an allegory for the state of China in the late 1990s. The story’s protagonist is Xiao Shuai, a bookseller who falls in love with the seductive, free-spirited An Hong. To learn her address, Xiao follows her, but An spurns his advances. He refuses to give up; eventually she caves in and invites him to her home for some quick love. Unfortunately they start, but are interrupted at a crucial moment. Later Xiao is accosted by the burly henchmen of An’s new lover, a sleazy nightclub owner. They are beating him like an old rug when Lao Zhang, an old researcher, intervenes. During the scuffle, his prized laptop computer is smashed and later, he demands that Xiao replace it. But Xiao cares nothing for the destroyed laptop; he only wants revenge upon his attackers. Together he and Lao arrange to meet the villains in their club for a showdown.