One of China’s foremost Sixth Generation directors, Wang Xiaoshuai (Beijing Bicycle, Shanghai Dreams) tells a striking, autobiographical coming-of-age tale set in the final days of China’s Cultural Revolution. Eleven-year-old Wang Han lives with his family in a remote village in Guizhou province. When Wang is selected to lead his school through their daily gymnastic regiment, his teacher recommends that he wear a clean, new shirt in honor of this important position – a request that forces his family to make a great sacrifice.

Constantly hunting for new ways to express her volcanic dynamism and wealth of ideas, Xiaolu Guo has created a vocabulary of her own, both visual and linguistic, that reflects her sense of being caught between Chinese and English, and her experience growing up during her home country’s wild transition from totalitarian enclave to the new shrine of global capitalism. An “alien” at home and in the global intellectual elite, Guo is an ideal interpreter of the sense of alienation gener­ated by social upheaval and globalization, phenomena for which UFO in Her Eyes is a sophisticated and amusing metaphor. In a remote village in Southern China, under a hundred-year-old camphor tree, Kwok Yun, a thirty-something agricultural worker, copulates with her secret (and married) lover, the local school headmaster. On her way home, she sees a strange stone on the ground. When she picks it up, the world around her turns white, as if illuminated by supernatural light. She faints, and wakes up to find a giant white man with hairy legs who has been bitten by a snake. Yun must have been visited by a UFO. UFO in Her Eyes is surrealist and ironic, but also pierced with melancholy and beau­tiful photography. With startling detail, Guo reshapes reality into a hyper-vivid portrait of chaotic contemporary Chinese society. 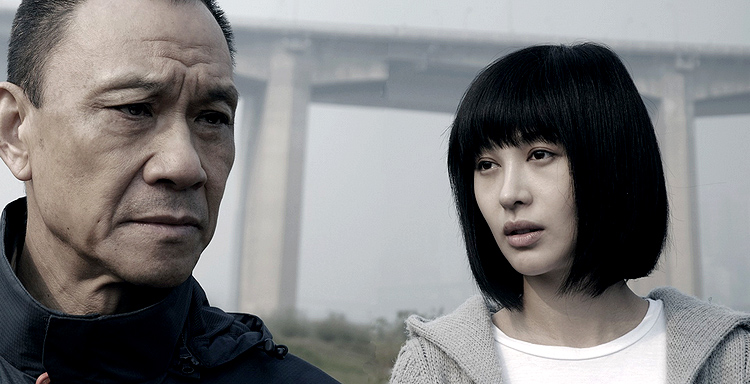 Award-winning Chinese filmmaker Wang Xiaoshuai explores new territories with his latest film Chongqing Blues, which was Mainland China’s only entry in the main competition of the Cannes Film Festival 2010. Inspired by a true hostage case that happened in Chongqing, the film digs into the heart of a guilt-ridden father who seeks redemption after the tragic death of his estranged son. Upon returning from his voyages, shipmaster Lin Quanhai is informed that his son was gunned down by the police half a year ago in a supermarket robbery. The tragedy prompts Lin to return to his Chongqing hometown to find out what happened to his son, whom he hasn’t seen in 13 years. His quest eventually brings him to the painful realization that he is the one to blame, having inflicted indelible damages to the ones closest to him through his long absence and negligence.

Mei, a young Chinese girl bored with life in her little village, decides to quit for the nearest town, Chongqing. But life there isn’t much easier either; sacked from a clothing factory shortly after starting work, she makes do with a job in a hairdressing salon. There she meets and falls for Spikey, a local mafia’s contract killer. For this brute of a man – who has no qualms about asking her to beat him in the street with a nunchaku – she seems simply another notch on the bedpost. One evening, he comes home covered in blood and dies at her feet. Mei discovers several bundles of banknotes under his mattress, and sets off for London where she has an opportunity to marry Mister Hunt, a man of seventy. In her new husband’s silent home, a new life begins. Will she be satisfied with this monotonous routine? Paced to an original soundtrack by John Parish – working with PJ Harvey and the band Eels – and chaptered in telling titles such as Sometimes you wonder who you really are and Mei feels love under the Big Ben calendar, Xiaolu Guo has made a film in which the challenges Mei must confront do not deter her quest for a more promising future. The filmmaker uses elements of nature – stifling summer heat, a duck bleeding to death, a dog wolfed down by a fox –to express her protagonist’s feelings. Through this journey and the people Mei meets, She, a Chinese conjures the mix of cultures in the early 21st century and how people, lifestyles, consumer goods, and music all cross borders. Although these cross-cultural currents bring about a degree of chaos in Mei’s life, she finds the will to escape isolation, and to follow her desires, come what may.

A Taiwanese filmmaker makes a film based on the myth of Salomé at the Louvre. Even though he speaks neither French nor English, he insists on giving the part of King Herod to the French actor Jean-Pierre Léaud. To give the film a chance at the box-office, the production company gives the role of Salomé to a world famous model. But problems arise as soon as filming begins… Amidst all this confusion, the director suddenly learns of his mother’s death. The producer flies to Taipei, to attend the funeral. The director falls into a deep sleep where his mother’s spirit does not seem to want to leave her old apartment. The producer has no choice but to wait, alone and lost in a strange city. As after a very long voyage, filming will resume with all who were lost in the underground of the Louvre.

Nanjing, present day, springtime. Wang Ping’s wife suspects him of adultery. She hires Lou Haitao to spy on him and discovers that her husband’s lover is a man, Jian Cheng. It’s with this man that Lou Haitao and his girlfriend, Li Jing, form a torrid love triangle. For all three, it’s the beginning of asphyxiating sultry nights of physical abandon that exalt the senses. A journey into the confines of jealousy and obsessive love.

Ann Hui’s darkly realistic Night and Fog starts at the end of the story: a man murders his wife and, based on statements by unreliable witnesses, the film goes on to investigate how things could have got this far and what kind of man was able to kill his family; questions that almost inevitably remain unanswered. Night and Fog, named after Nuit et brouillard (1955), Alain Resnais’ documentary about concentration camps, looks at the difficult problem of domestic violence. An elderly man from Hong Kong takes a wife from outside the city and goes on to neglect and abuse the woman. Ann Hui’s cool registering camera is juxtaposed with flashbacks within flashbacks and dream sequences, just as in her earlier film, Song of the Exile.