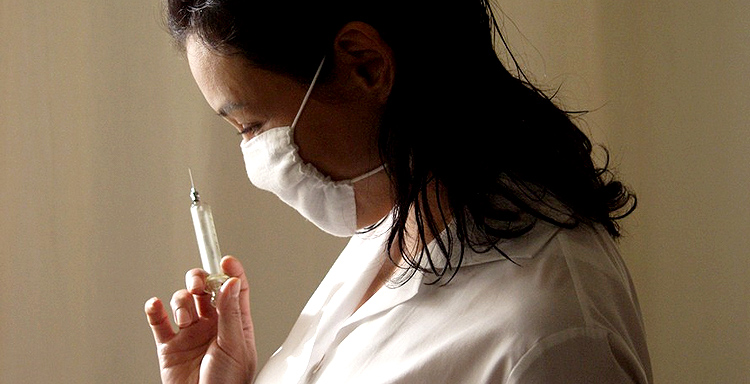 Wen Jiang’s personality takes center stage in The Sun Also Rises, his first effort since the 2000 Devils on the Doorstep, a film that has yet to be released in China. While The Sun Also Rises captivates with its sumptuous colors, magical realism, high energy, and outstanding performances, its elliptical plot and lack of coherent narrative suggests that Jiang may have purposely clouded the film’s meaning in symbols and code to escape the Chinese censors. Loosely based on author Ye Mi’s novel Velvet, the film is set in China during the Cultural Revolution. There are four stories and six characters in the film, but they have a tenuous connection to each other. Three episodes are set in the 1970s and one twenty years earlier, but Jiang provides no intertitles or other indicators to help the viewer recognize changes in theme, time, or place. As the film opens with a tableau of gorgeous colors and people running, a young woman identified as the mother of a teenage boy buys a pair of embroidered shoes. The colorful shoes are promptly stolen by a mysterious bird, which repeats the mantra “I know, I know, I know,” and the woman falls into what seems to be madness—climbing trees, collecting rocks, digging a pit in the middle of the forest, and screaming the name of Alyosha (which we eventually learn was the name of the boy’s father). Meanwhile her dutiful son tries to protect her, at the cost of having to constantly leave his job. The segment is playful, magical, and poetic in its songs and poetry, and it suggests that insanity reigned supreme during the Cultural Revolution.

Beijing Bastards is a 1993 drama film by sixth generation director Zhang Yuan, and is one of the first independently produced Chinese films. A rock musician looks for his girl-friend who left while pregnant, trying to decide whether to keep the baby.