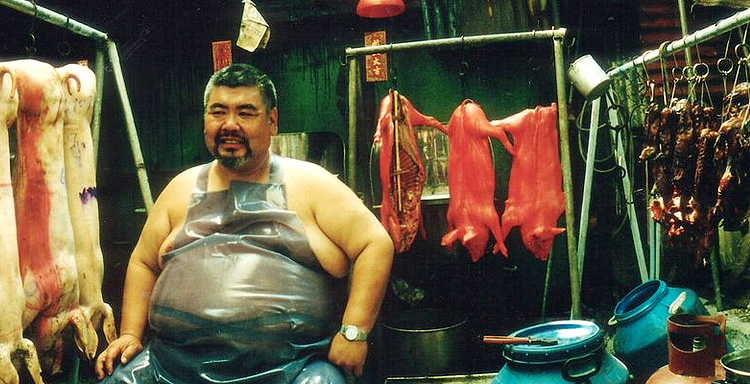 Sex, violence, and pork are the hallmarks of this ultra-black comedy from maverick Hong Kong filmmaker Fruit Chan. Boss Chu is the rotund proprietor of a fast-food stall specializing in pork located in a decaying Hong Kong shanty town. Boss Chu runs the business with his equally porcine sons Tiny and Ming. Living near the pork stall is a teenaged would-be gangster, Wong Chi-keung, who though e-mail makes the acquaintance of a young woman calling herself “Shanghai Angel Hung-Hung”, a prostitute recently arrived in Hong Kong from China. After doing frequent business with Wong, Hung-Hung begins frequenting the pork stall, where she becomes close friends with young Tiny. However, Ming soon develops a more carnal interest in Tiny’s new playmate, and Hung-Hung takes advantage of Ming’s infatuation by seducing him. Boss Chu is also attracted with the young prostitute, and she begins working her charms on the father of the family. Once Wong, Ming, and Boss have all fallen under Hung-Hung’s spell, the three men each begin receiving threatening letters from a lawyer, who claims that Hung-Hung is underage and that statutory rape charges will be filed against them unless they’re willing to pay, leading to some unpleasant visits from the blackmailer’s enforcers. Heunggong Yau Gok Holeiwut is the second film in a planned trilogy about Chinese prostitutes in Hong Kong, following Fruit Chan’s 2000 release Durian, Durian.