Middle aged businesswoman Xie Chunhua is well-off but still leads a celibate life. In her plastic flower factory, she notices two young men: they have similar appearance, one plays flutes, and the other writes poems, entirely different from the rest of workers in the factory. Successively they fall in love with their wealthy boss. Maybe out of their love to the enchanting boss, or their desire to her property, or maybe jealousy, a complex feeling arises between these two men… At the night before the wedding ceremony, he, or maybe the other man, stabs at the other, and then jumps off the tower. The next day, two dead men, are still alive. One of the men sees the wedding between the other man and Xie Chunhua taking place amid the sea of plastic flowers Is it purely imagination or just another pathetic reality? 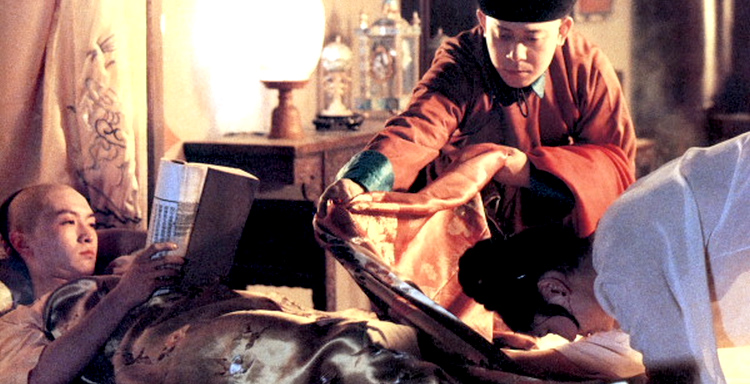 Tian admits that this chamber epic was not a ‘personal’ project; for a film which began shooting only a few months after the Tiananmen Square massacre, it certainly feels more like a flight into history than even an oblique response to the moment. Spanning the last five decades of the Qing Dynasty, it centres on the oddly affectionate relationship between Empress Dowager Cixi and her chief eunuch; the stars were a real life couple at the time. The often filmed historical facts are rehearsed efficiently enough: the folly of deflecting naval funds to the building of the Summer Palace, puppet emperor Guangxu’s ill fated bid for autonomy as a reformist and so on. But the film is vindicated by its prime mover Jiang Wen’s colossal performance as Li; no other actor has ever gone deeper into the implications of castration and living as a neutered animal.

In Beijing 1930s, a young woman is torn between her lover and her disabled husband.

Hu Yuyin, a young woman in a small Chinese town on the eve of the Cultural Revolution is happily married and runs a successful roadside food stall selling spicy beancurd. Yuyin is supported by Party members Li Mangeng, who once wanted to marry her, and Director Gu, a war veteran in charge of the granary. But in 1964 the Four Cleanups Movement sends a Party work-team to root out Rightists and capitalist roaders. The team is led by Li Guoxiang,a single woman, and helped by Wang Qiushi, a former poor peasant who has lost his land because of his drinking. At a public struggle session, Yuyin is declared to be a “new rich peasant.” Both her home and business are taken from her and her husband, Li Guigui commits suicide in despair. After the first waves of the Revolution have ended, Yuyin returns to the town, now relegated to a lowly street sweeper. She then falls in love with Qin Shutian, who had come in the 1950s to collect local folksongs but was declared to be one of the Five Black Categories. When Yuyin becomes pregnant, however, this loving relationship attracts the outrage of Li Guoxiang and Wang Qiushe, who themselves are having a secret affair. Shutian is sent to reform through labor and it is not until Deng Xiaoping’s reforms in 1978 that his case is reviewed and he is allowed to return and help Yuyin re-establish their street restaurant.